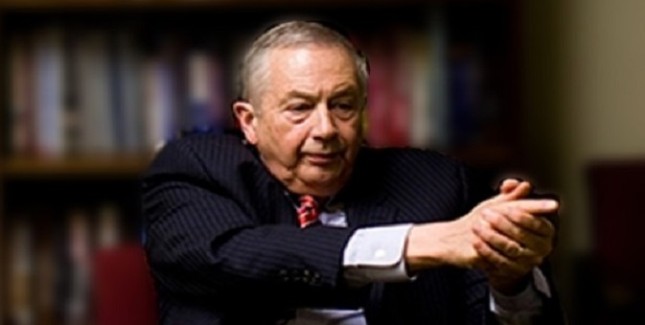 According to the executive director emeritus of Gun Owners of America, Larry Pratt, our founding father would have insisted that every military-age man in the U.S. carry at least one M-16 rifle.

Prat interviewed Don Brockett, the author of “The Tyrannical Rule of the U.S. Supreme Court,” on his “Gun Owners News Hour” program on Saturday, when Brockett insisted that the Second Amendment gives individual states the right to defend themselves. In order to efficiently do this, people should be allowed to purchase “equal weaponry” such as rocket-propelled grenades.

“In Article 1, Section 10, where the state can’t engage in war unless it’s invaded, well how can it defend itself if it’s being invaded if the people don’t have any Second Amendment right to arms?” Brockett asked. “And I maintain in the book, even though some may think this is going too far, that you’re entitled to the same measure of weapons as the weapons that might be used against you. So does that mean everybody can have an RPG in their home? I don’t know. I think we need to discuss it, because how could you stop the invading army unless you have the equal weaponry? Or if you want to provide it by your national guard, which can be distributed to individual citizens when that need comes about.”

Pratt pointed out that the Militia Acts of 1792 “seemed to provide for making sure all militia-age men had to have military firearms. Now, I suppose in today’s context, at a minimum that would be the machine gun battle rifle, the M-16, or whatever its modern, even more modern equivalent is, that every American soldier would be carrying. That would seem to me, if those were laws consistent with the Second Amendment, then that would be kind of what the founders and their successors had in mind.”

Brockett suggested that every state should be prepared to defend against “an invading army,” including “the federal government invading the state.”