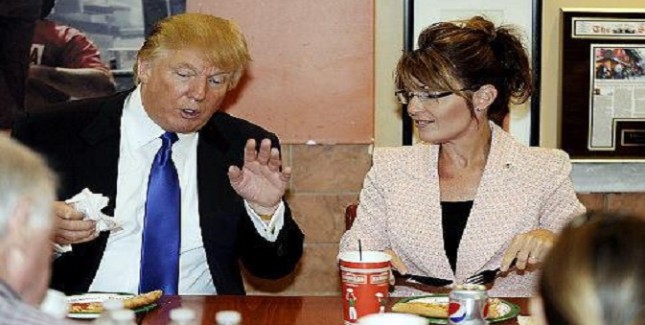 Sarah Palin has never really been one to shy away from the public eye and on Friday, attendees at a Trump rally got their money’s worth.  Appearing as a surprise guest, the Alaskan public figure had another one of her trademark baffling rambles as she introduced the Republican presidential hopeful.

She started off by poking fun at staff from different media houses with the words, ‘suck it up, cupcake’ as she has it in mind that they had doubted Trump’s longevity. She went on to dub Trump the, ‘’golden wrecking ball.’’

Stressing the fact that Donald Trump will probably be the Republican presidential nominee, Palin put it plainly, but probably not so simply, “He in now though, he is now we the people’s nominee,” she began. “Suck it up, cupcake! No, see the pundits they are still so very confused. I guess they did not realize we meant what we said. When we said enough the status quo has got to go, the permanent political class has failed us.”

She continued the jibber jabber, adding, “Trump came roaring in through this primary, and he blew the lid off the corrupted and corroded machine. He was like a golden wrecking ball. He wrecked what needed to be wrecked in order to shine light on the shenanigans, in order to allow us to rebuild because, see, Trump builds things. He builds big things. And with optimism. And with common sense. He solves problems!”

No one was safe from Palin’s rants as she took at the recent visit to Japan by Barack Obama. She remarked, ‘’ “I want a president who inherently knows it weakens us showing up, Memorial Day weekend even! No! Instead of showing up somewhere to promise, hey when you mess with the innocent, you pick a fight with America, you steal our security, you spit on our freedoms, we’ll put a boot in your ass. It’s the American way!”

After the rally, Palin hinted her faith in the Hispanic vote saying, “You know what is real cool and encouraging about California is absolutely there’s a shot here in California,” Palin opined. “People here, like across the country, are really fed up on the local, state and national level, fed up with just that status quo, that business as usual, that has us on a trajectory downward. And there’s kind of like no light at the end of the tunnel if we just keep reelecting the same, so people are cognizant of that here in San Diego, because smart people are here. So here in California, I think Trump’s going to win, and that would be spectacular. That would really be the golden wrecking ball, wouldn’t it?”