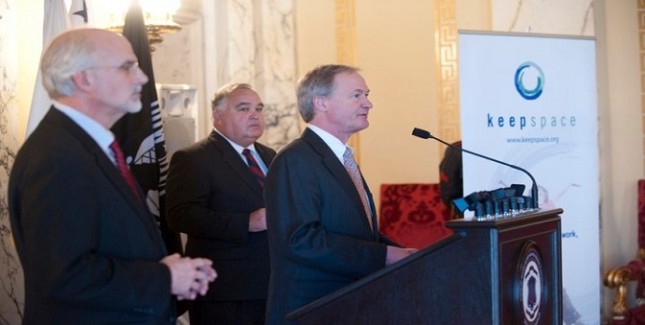 On CNN on Thursday, just a week after announcing he formed an exploratory committee, his most definitive statement he’s made toward formalizing a 2016 campaign, former Rhode Island Gov. Lincoln Chafee said he’s running for the Democratic nomination for president.

When asked why he’s been so critical of Democratic front-runner Hillary Clinton, in the context of having not formally declared his presidential campaign, Chafee told CNN’s “New Day” “Yes, that’s why I’m running. Because I feel strong about where we’re going as a country.”

Debbie Rich, Chafee spokeswoman, said he did not declare himself as a candidate for president Thursday, even though he said “that’s why I’m running.” She also added, during a phone interview with CNN, “We are still in the exploratory committee phase. We will file the proper papers to be an official candidate, but that has not happened yet.”

Last week, Chafee, a former senator and former Republican, announced he was forming an exploratory committee. By taking sharp jabs at Clinton, Chafee has been differentiating himself from fellow Democratic primary contenders, willing to be more critical than would-be challengers former Virginia Sen. Jim Webb or former Maryland Gov. Martin O’Malley over her vote in Congress to authorize the war in Iraq.

Chafee hasn’t been included in the overwhelming majority of public polling of the Democratic primary, in addition to being a long shot who has been out of office since his gubernatorial term ended at the beginning of 2015. In Thursday’s interview, Chafee acknowledged his chances, saying: “There’s no doubt I’m the underdog.”