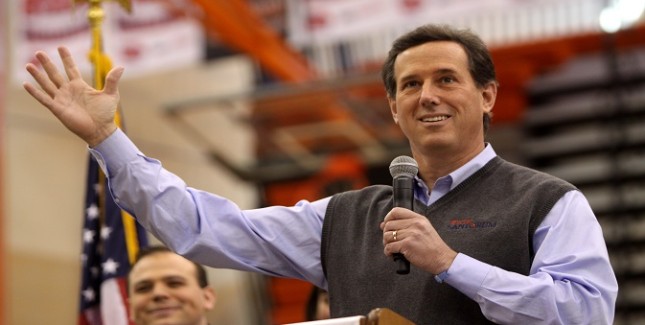 Republican presidential candidate Rick Santorum argued over the weekend that President Barack Obama should redirect the energy that he has been putting into fighting climate change into promoting heterosexual marriages “for the survival of our country.”

In an interview on Sunday, Santorum told the hosts of Fox & Friends that the U.S. Congress should pass laws to require Supreme Court justices to face elections and to force them to “take all appeals” because of their ruling that effectively legalized marriage for same-sex couples.

“The better solution if you’re going to put effort into trying to control the judiciary is by doing things that limit their jurisdiction or requires, for example, the Supreme Court to take all appeals,” he explained. Fox News host Tucker Carlson wondered what Santorum would do to stop the institution of marriage from “collapsing” after Friday’s Supreme Court ruling.

“The most important power that a president has – and obviously I’m running for president – the most important power the president has is the power of the bully pulpit,” Santorum opined. “Can you imagine if instead of spending all his time talking about global warming, if the president talked about the importance of marriage and fathers and mothers taking responsibility for raising children in healthy homes? And actually promoting marriage. And actually have programs that support the idea of marriage and togetherness in order to raise children,” he continued.

“That, to me, is the most important thing we can do as a society, is begin to lift up marriage as an institution that’s important for the survival of our country because too many children are falling through the cracks.” According to the candidate, the Supreme Court’s decision had cemented the notion that “marriage has nothing to do with children.”