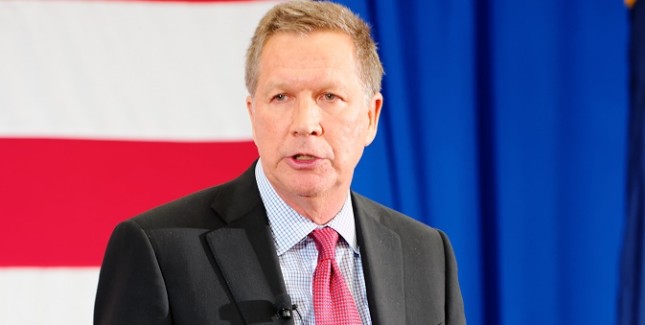 Even when talking about the importance of Latino outreach, GOP presidential candidates seem to have a way of creating problems for themselves. Republican hopeful John Kasich said Thursday that Latinos are good people who should vote for the GOP – but then, he seemed to draw on the stereotype that many of them are hotel maids.

“I look at our friends at the Latino community as people that ought to be voting Republican,” the Ohio governor said at a campaign event, according to The Columbus Dispatch. “I mean, they’re very strong family. We could all learn a little from them about the importance of family, couldn’t we? Because they are great, they are God-fearing, hard-working folks. And a lot of them do jobs that they’re willing to do. That’s why, in a hotel, you leave a little tip, you know?”

He went on to talk about a hotel maid he met on a trip to Los Angeles, who wrote him a note saying, “I really want you to know that I care about your stay,” according to the Los Angeles Times. “Is that just the greatest thing?” he continued. “So, you know, we can learn a lot and she’s Hispanic, ‘cause I didn’t know it at the time, but I met her in the hallway – asked her if I could get a little more soap.”

Kasich spokesman Chris Schrimpf said the candidate was referring more generally to the hospitality he’d received. “He was talking about how great the service was and how we should respect everyone in our society, no matter what their job or position might be,” Schrimpf said.

Kasich’s comment fits into a broader perception that Latino immigrants – and particularly, undocumented people – do jobs that others won’t. Although the percentage of undocumented immigrants working in white-collar industries has increased, most of them work in low-wage jobs.

Many agricultural workers are undocumented, for instance, which caused a major problem for Alabama farms in 2011 when people left the state after its harsh anti-unauthorized immigration law went into effect. Immigration advocates argue the willingness of undocumented people to take on jobs Americans won’t is a reason for reform.