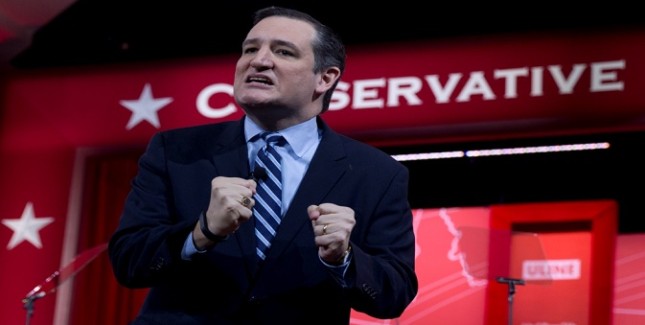 Sen. Ted Cruz (R-Texas), who is a presidential candidate, said Friday that he believes anyone who wants to be president must fear God and pray daily. Speaking at the National Religious Liberties Conference in Iowa, Cruz joined other GOP presidential candidates for a discussion about the persecution of Christians in the U.S. and around the world. After some very extreme, very weird comments about homosexuality, right-wing pastor Kevin Swanson introduced Cruz to the stage to ask him how important it was for candidates to submit to Jesus Christ as “the king of the President of the United States.”

“Any president who doesn’t begin every day on his knees isn’t fit to be commander-in-chief of this country,” responded Cruz. Christianity has long been a part of Cruz’s political identity. Since his election to the U.S. Senate in 2012, Cruz has been a regular feature at conservative Christian gatherings and on radio programs, where he’s repeatedly taken on “radical atheists and liberals,” whom he’s accused of trying to strip religion out of the public sphere. His father, Rafael Cruz, is an evangelical pastor who has attracted controversy over the past few years with scathing anti-gay sermons and attacks on “Kenyan socialist” President Barack Obama.

As atheist blogger Hemant Mehta points out, Cruz stopped short of explicitly suggesting that nonbelievers, or simply those who don’t pray every morning, should be barred from holding public office. Neurosurgeon Ben Carson, also running for the GOP presidential nomination, however, appeared to run afoul of the Constitution’s language against a “religious test” for public office earlier this year, when he said that a Muslim couldn’t be president because of their faith.

Atheists are one of the most politically underrepresented groups in the U.S. According to the most recent Pew survey on religious affiliation, about 3 percent of Americans identify as atheist and 4 percent identify as “agnostic,” all part of the nearly 23 percent who say they’re “unaffiliated” with any particular religion. Despite those numbers, there are no openly atheist members of Congress, and only a handful of U.S. politicians who identify as unaffiliated, or who have chosen not to identify a specific religion.