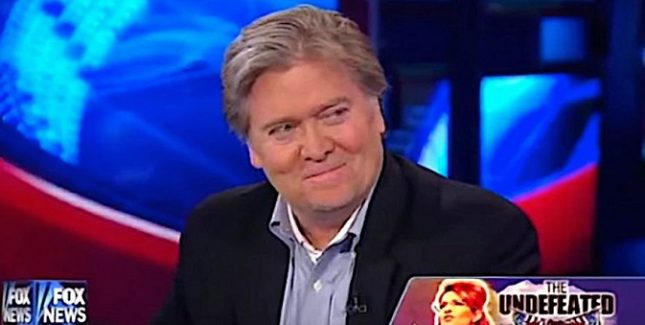 During a panel talk on MSNBC’s AM Joy, a former Breitbart executive said that if the civil war between senior Trump advisor Steve Bannon and the president’s son-in-law Jared Kushner escalates to the point of Bannon getting fired, there will be “open warfare” on Trump.

Former Breitbart executive Kurt Bardella told host Joy Reid that the weak reaction from the conservative “Bannonite wing” of the party to the bombing in Syria is a sign that Bannon may be losing his grip on the White House.

“They’re concerned they are about to lose their link to the West Wing and direct access to the president through Steve Bannon,” Bardella explained. “Clearly Steve is under siege right now. The fact that so many on the conservative right so forcefully came out against the actions of the president and strikes in Syria just tells you how much trouble Steve actually really is in.”

“But they are really going out there publicly, hammering Jared Kushner-aligned strategies because they see Steve could be in jeopardy and could be asked to leave at some point in the near future,” he said.

“I don’t know anything about Jared Kushner, but I know about Steve Bannon,” Dean remarked. “Steve Bannon is a white supremacist and he has no right to be in the White House, no right to have his values influence the president of the United States, and the sooner he goes the better.”

“Jared Kushner from the little I know about him is a far better candidate,” Dean continued. “A 36-year-old, rather than a white supremacist who hates Jews. I don’t think somebody like that belongs in the White House and I can’t imagine why Trump put him in there in the first place. The sooner he’s gone, the better for America.”

When host Reid asked if Breitbart would still support Trump is Bannon got the boot, he said it would get ugly.

“If Bannon is pushed out it will be open warfare from the outside in,” Bardella warned. “And all of the sudden the pages of Breitbart, who have been incredibly generous to Donald Trump to say the least, will start turning their fire on him or, at the very least, assign blame saying Trump betrayed the conservative right because of Jared Kushner and liberal Democrats inside the White House have turned them against us.”