Sen. Marco Rubio (R) was among the Florida state legislators who voted for the so-called “Scarlet Letter” law in 2001 that required single mothers to publish their sexual histories in the newspaper in order to place their babies up for adoption. Five U.S. congressmen – Reps. Mario Diaz-Balart (R), Lois Frankel (D), Jeff Miller […]

A Florida high school principal, who defended the Texas police officer at the center of that infamous pool melee, has become the latest victim of radical speech police hell-bent on trying to silence public discourse. Alberto Iber lost his job as the principal at North Miami Senior High School after he wrote a comment […]

New York City mayor Bill de Blasio, a former Hillary Clinton campaign manager, will not be attending Clinton’s official campaign launch this Saturday, which will be held in Roosevelt Island, New York. Although de Blasio helped Clinton win her Senate election in 2000, he told reporters Wednesday that he will not attend because he […]

A Georgia woman is in jail with murder charges hanging over her because she took a pill to induce an abortion, resulting in the death of her fetus as she was en route to the hospital. According to local WALB News, Kenlissia Jones, 23, purchased a drug called Cytotech online from a source in […] 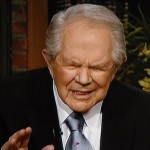 Pat Robertson advised a woman to show her Christian love by telling a co-worker that hear dead toddler could have grown up to become the next Hitler. The woman emailed the “The 700 Club” and asked Robertson how she should respond to a co-worker who could not believe in a god who allowed her […]

This week Senators Lindsey Graham and Ted Cruz have posed a challenge for would-be presidents and all Americans: if the United Nations criminalizes Israel’s exercise of the right of self-defense it will pay a heavy price. The organization has no right to expect billions of U.S. taxpayer dollars to be doled out every year […] 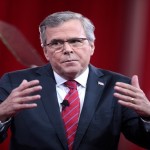 Public shaming would be an effective way to regulate the “irresponsible behavior” of unwed mothers, misbehaving teenagers and welfare recipients, former Florida Gov. Jeb Bush (R) argued in his 1995 book Profiles in Character. In a chapter called “The Restoration of Shame,” the likely 2016 presidential candidate made the case that restoring the art […]

Sen. Joni Ernst (R-IA) said over the weekend that U.S. troops were “ready to go back” to Iraq to fight ISIS. In an interview with ABC’s Jonathan Karl that aired on Sunday, Ernst pointed out that she had not yet made a call for ground troops to be redeployed to Iraq. “I am not […] 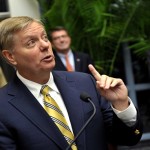 Sen. Lindsey Graham (R-S.C.), a 2016 Republican presidential candidate, would be just fine being single in the White House – and he doesn’t think voters will mind either. Graham, who has never married, told The Huffington Post on Saturday that he didn’t think his marital status would affect his chances of winning the presidency. […]

Washington, D.C. – During the 2004 elections, George W. Bush’s campaign, managed by a closeted gay man, pushed a series of anti-gay ballot initiatives across the country. The House of Representatives, led by a male speaker who allegedly sexually assaulted a male minor, moved a constitutional amendment to ban same-sex marriage after beating back […]